Tay-Sachs and Sandhoff diseases are very rare diseases that have variable ages of onset and patterns of progression. This can make recognition and diagnosis difficult.

In reality, the ages of onset and patterns of progression occur along a spectrum. However, for ease of understanding, disease types are often grouped together based upon the age they present and common features they display. These groups are:

The earliest presenting form of the diseases is called infantile Tay-Sachs or Sandhoff disease.

The signs of infantile disease usually appear after a child’s first six months of life, prior to which they have appeared to be developing normally. Development begins to slow and concerns regarding this are often the first reason that parents seek medical advice for the child. Other physical signs at this age include a prominent startle reflex to noise and a gradual reduction in vision.

Children with the classical form of Tay-Sachs or Sandhoff disease begin losing developmental skills, such as the ability to roll over, sit or reach out. Other symptoms include loss of coordination, increased muscle tone (spasticity), increased head size (macrocephaly), progressive inability to swallow, difficulty breathing and recurrent chest infections.

Most children experience recurrent seizures, often by the age of two, and eventually lose muscle function, sight and hearing. Towards the end-stages of the diseases, children become non-responsive to their environment and progress to a premature death in early- to mid-childhood. 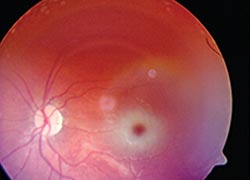 Most individuals with infantile Tay-Sachs and Sandhoff disease have a cherry red spot known as a cherry red macula in the retina, observable by a physician when examining the eye. This is commonly the first sign that the individual may be affected by a GM2 gangliosidosis.

This red spot is due to blood vessels in a retinal area that show through as red next to the pale gangliosides that have accumulated in the surrounding retinal nerve cells.

The juvenile forms of the diseases are rarer than the infantile forms and are usually initially seen in children between the ages of 2– 10 years.

The cherry red spot common to infantile forms is less commonly seen in juvenile forms of the diseases.

Early symptoms of juvenile Tay-Sachs and Sandhoff diseases include lack of coordination or clumsiness and muscle weakness such as struggling with stairs. A child may also exhibit slurred speech, swallowing difficulties and muscle cramps. These symptoms progress with time.

Children with juvenile Tay-Sachs or Sandhoff disease slowly decline, losing their ability to walk, eat on their own and communicate. They are prone to respiratory infections and often experience recurrent bouts of pneumonia. Many have seizures.

Adult onset progresses more slowly than other forms. It is characterized by unsteadiness of gait and progressive neurological deterioration.

The symptoms of LOTS, which present in early adulthood, include speech and swallowing difficulties, unsteadiness of gait, spasticity, cognitive decline, and psychiatric illness. The cherry red spot common to infantile forms is almost never seen in LOTS.

As it is very difficult to identify, when an individual is finally given the diagnosis they often look back to their childhood and notice symptoms that were not obvious at the time. A common early sign is not being athletic and/or speech difficulties or a stutter as a child or teenager. One early indicator that can lead to a LOTS diagnosis is a mental health problem, although this will just be the beginning of a long road to the final diagnosis. About 40% of affected adults experience mental health disorders, such as bipolar disorder or psychotic episodes.

Like all forms of Tay-Sachs and Sandhoff diseases, there is a loss of skills, although in LOTS this is much slower than in the infantile and juvenile forms of the diseases. Over a prolonged period of time, adults with LOTS slowly decline and require more mobility assistance. Although many experience speech and swallowing difficulties, only a few will eventually require a feeding tube.

As LOTS is very hard to diagnose, individuals can experience a lengthy delay in finding out that they suffer from it. It is very common for LOTS to be misdiagnosed as other more common neurological diseases.

Tay-Sachs and Sandhoff Diseases: a practical guide for families and carers